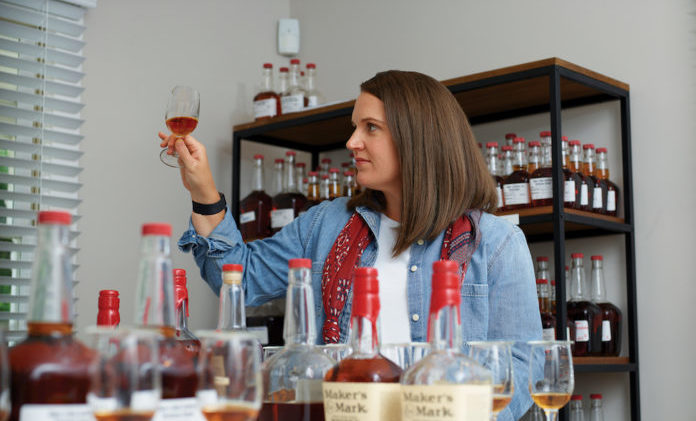 September is National Bourbon Heritage Month and Bourbon Hunting Season. It’s a celebration of our national spirit, when distilleries release some of the most rare and sought after expressions of the year — including Maker’s Mark. Beginning in 2019 the brand began rolling out their new Wood Finishing Series. The 2020 Limited Release Bourbon was unveiled in August.

Maker’s Mark is not known for constant releases. Founded in 1958, the company waited until 2010 for its first line extension with Maker’s 46. The success of that launch inspired the new Wood Finishing Series, including the 2020 iteration, which highlights the distillery’s pursuit of vanilla and caramel notes.

For a closer look at this year’s Limited Release Bourbon, we recently spoke with Jane Bowie, director of innovation at Maker’s Mark.

What do you look for when creating new Maker’s Mark?

What we’re doing with these new releases is we’re spending so much time looking at our own processes. As you know, we’re not a brand that puts out a new product every other day. We’re conservative sometimes before birthing a new whiskey into the world. We’ve been studying oak and grains, understanding agriculturally what we do and diving deep into it. We’ve been looking at processes that have been around since Bill and Margie Samuels founded the brand in 1958. The goal is to celebrate the decisions that they made.

Last year’s release celebrates the fact that we still propagate the same house yeast strain. It’s not necessarily good or bad that we do this; it’s just different. We wanted to make a whiskey that celebrates that, and that we have two full-time employees whose job it is to grow our own yeast.

This year we celebrated our continued requirement that Independent Stave Company air dry our staves before the staves go into the kiln. Again, this process is not good or bad; it’s just a bit more labor intensive and costs more. It pulls out a lot more tannins from the wood, which helps create more caramel and vanilla flavors. We wanted to make a whiskey that celebrates that stave design.

JB: I don’t know if I would use the word ‘smoother’, but we definitely want a creamier and softer whiskey. We’re looking for less tannins from the wood because we’re more of a creamy whiskey focused on caramel and vanilla. I don’t think anything at 110.8 proof could be called ‘smooth’, but more like super approachable for a cask strength. We want a softer whiskey without that aggressive wood note coming through.

How do you accomplish softer whiskey?

JB: The reason oak is used for aging whiskey is because oak is flavor neutral when raw. You have to change something in the chemistry of the oak to achieve flavor. You change that by how you treat or cook it. Brad Boswell, CEO of Independent Stave Company, says that you can take two stacks of wood and leave one out for 80 years, and burn the other for 80 minutes, and they’ll come out looking exactly the same.

Treatment and burning are the two levers they can pull at the cooperage. Our levers are time, temperature, the whiskey we give the cooperage and the climates used for aging. My job is understanding all those levers and where they come together to create great flavor.

JB: We wanted to make something that was a treat for our Maker’s Mark drinkers. We have very loyal consumers who have kept the lights in here for 62 years. We wanted to do something for them that’s great while also telling a story.

How are you enjoying Bourbon Heritage Month?

JB: Let me tell you, as a Kentuckian currently sitting on my porch on a fall day, it just feels like bourbon-drinking weather. This is the time of the year when distillers would be coming back online after their traditional summer shutdown. You walk in now and smell the mash cooking, it’s just wonderful. Everything points now to the time for drinking bourbon. I love how Kentucky celebrates its bourbon heritage.