Launching new products in the premium vodka category is challenging. Big brands already own much of the market share, while new competing vodkas annually appear on the scene.

Nevertheless, the craft brand Devotion Vodka, and its line of straight and flavored vodkas, has grown every year in all of its markets since launching in 2008. What’s behind this success? I recently spoke with Devotion Founder/CEO Drew Adelmann (above, left) and Partner/COO Michael Calleja (right) — both veterans of the food and beverage industry — about their rising brand.

Cheers: What has allowed Devotion to take off?
Michael Calleja: Our unique selling points. We’re the first vodka that has no sugar and no gluten, which is spelled out right on the label. We’re 100% Whole Foods-certified. We’re American-made. And we just added nutritional facts on all our labels.

And our go-to strategy has been “a mile deep before a mile wide.” We don’t spread ourselves too thin, instead focusing on the areas we do best in. We make sure that we have people out in the field every day. We’re getting our bottles on shelves in the right positions, fighting for the right demos. It’s not easy. But we’re only in eight states right now and have done over 50,000 cases in sales this year.

Drew Adelman: We come from the philosophy that we don’t have the budget of everyone else, but we will outwork them. We will be expanding over the next 18 months, bringing our total up to 16 states, then 20. Right now we just have 750-ml. and 1.75-L. bottles, and will be adding 50-ml. and 1-L bottles.

CH: How do you achieve flavor without sugar?
DA: In lieu of adding sugar we use the natural essence of fruit. It’s a proprietary process. We work with Allen Flavors, which helped create Arizona Ice Tea.

MC: A lot of other brands claim that they use essence of fruit, but really they’re only using 50% essence of fruit, and 50% sugar. We use 100%, which of course is more expensive to produce. But we believe that we’re way ahead of the curve with no-sugar. That could be the next big health trend. And we’re the only flavored vodka without sugar.

DA: A lot of other products pack sugar into the bottle, leaving you dehydrated the next day. We wanted to make something you could drink at night and then still function the next day. If you’re going to be bad, be good about it.

Also, health and wellness brands are on fire. We target towards Millennials who want cool and healthy lifestyle brands.

CH: How important was it to make gluten-free vodka?
MC: It really took us a long time to get that printed on our labels. It’s important. There are a lot of allergies out there that affect people. Gluten-sensitivity is a real thing. If it wasn’t, then the market for gluten-free wouldn’t be growing like this. 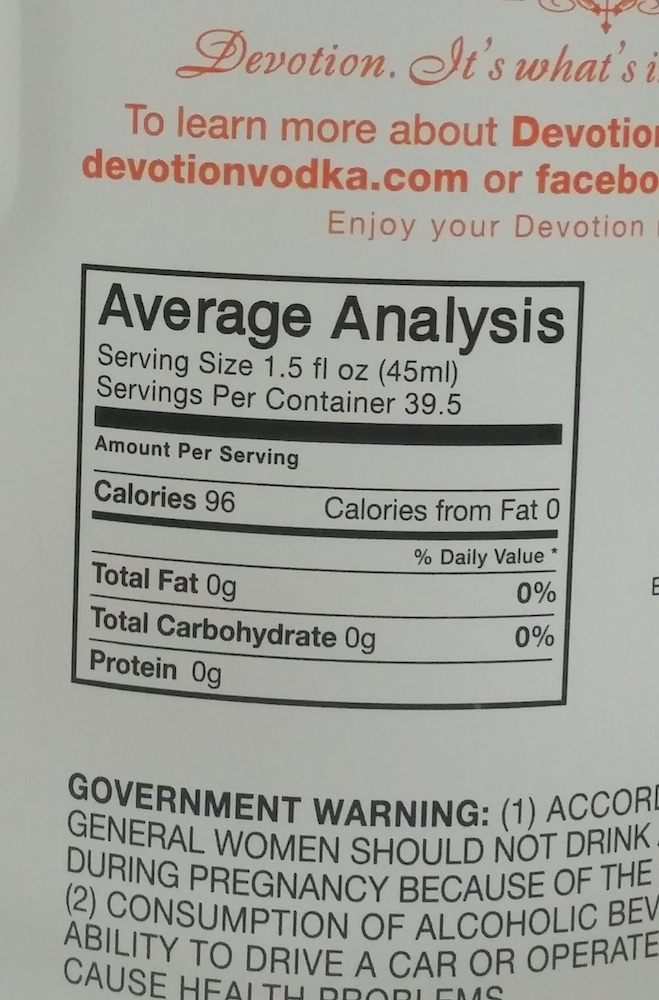 The nutrition facts on the back of the bottle.

CH: Flavored vodka isn’t exactly the hottest category. How have you had success there?
DA: We took a look out there and didn’t want to do flavors the normal way. That’s why we have flavors like Black and Blue, which is blackberry and blueberry, and Perfect Cosmo, a citrus-flavored vodka.

CH: How is the brand marketed?
MC: We’re involved with lots of movie premiers, the L.A. arts scene, the Emmy’s. On TV we were in Grace and Frankie and The League. Until recently we’ve never had a magazine campaign. It’s been all word-of-mouth.

DA: We have 115,000 followers on Facebook and 10,000 on Instagram. We had been doing that on our own but we recently hired a national PR company to take it to the next level. Our social media and press are both going to explode in late 2016 into 2017.

CH: Your website has a prominent section for charity.
DA: We’re big into that. We recently teamed up with Save the ta-tas. This October during Breast Cancer Awareness month we’ll be selling pink bottles of our Cosmo flavor. For every bottle sold we’ll donate $1.

CH: Why name the brand “Devotion”?
DA: So many brands have names that are difficult to know what they mean to you. I wanted our name to mean something that everyone could relate to. Devotion is a word that everyone can say in a sentence to describe themselves.

Kyle Swartz is associate Editor of Cheers Magazine. Reach him at kswartz@epgmediallc.com Next Story:
How The American Beer Landscape Is Changing